As COVID-19 antibodies begin flooding the immune systems of most Americans, it is important to remember the important role that hygiene has played over the past fifteen months. For many, the risks and dangers of the pandemic were kept at bay by hand washing, masking, and sanitizing after every new touch. That same kind of attention to hygiene is something federal contractors should retain as they are permitted to reenter a world filled with supply chain enforcement risk.

With the CARES Act, Operation Warp Speed, and the American Rescue Plan in the rearview mirror, another $1 trillion or more in infrastructure spending is likely on the way to congressional approval before the end of the summer. The country is awash in government spending. While this is great news for contractors able and willing to meet the government’s supercharged demands, those trillions of dollars come with ever-heightened scrutiny and oversight to trace where that money goes and how it is spent and accounted for. Why? Well, to ensure that any potential irregularities, misrepresentations, or fraud are thoroughly investigated and prosecuted, of course! And government investigators/auditors aren’t looking just at how dollars are (mis)spent—they are also increasingly looking at where products come from and how they are manufactured.

Since his earliest days in office, President Biden has signaled that supply chain security and domestic preferences in purchasing will be a hallmark of his administration. One of the initial executive orders issued, EO 14005, “Ensuring the Future Is Made in All of America by All of America’s Workers,” aimed squarely at strengthening the Buy American Act (BAA) and further increasing the federal government’s procurement of American-made goods and supplies (our detailed analysis of the EO is here.) That EO’s final implementing regulations are expected later this year, but it calls for, among other things, additional increases in the domestically produced content of products, a critical examination of BAA exceptions for some information technology, and increased scrutiny of the list of domestically unavailable articles at Section 25.104(a) of the FAR. It was therefore no surprise that just a few weeks later, Biden issued EO 14017, Executive Order on America’s Supply Chains, which highlighted domestic manufacturing and distribution capacities as top economic ‑‑ even national security‑‑ priorities.

In lockstep with those orders, the White House recently released its “100-Day Reviews under Executive Order 14017,” wherein the Departments of Commerce, Energy, Defense, and Health & Human Services provided specific recommendations “to strengthen U.S. manufacturing capacity for critical goods, to recruit and train workers to make critical products here at home, to invest in research and development that will reduce supply chain vulnerabilities, and to work with America’s allies and partners to strengthen collective supply chain resilience.” The White House also expressed plans to heighten enforcement through its establishment of a trade strike force to propose unilateral and multilateral enforcement actions against trade practices deemed to have “eroded critical supply chains.” In whole and in part, all of these efforts mean that federal contractors need to have a firm grasp on their ever-shifting supply chains. As most contractors are aware, bids to the government above $10,000 must include a Buy American Act Certificate, in which the vendor must certify that the end products offered to the government are domestic end products (or must specify precisely which end products offered are “foreign end products”). For solicitations where the Trade Agreements Act (TAA) will apply, vendors must complete a Trade Agreements Act Certificate, in which the vendor must certify that each end product is a U.S.-made or “designated country” end product (or must list exactly which end products offered are non-U.S. or non-designated country end products). Once these certifications are made, the vendor will be bound by them and may not later substitute noncompliant products; therefore, it is critical that the applicable BAA or TAA certification be completed carefully and accurately at the time of bid. The administration’s new priorities and policies will make these certifications more challenging for many suppliers and contractors. Any false certifications of compliance may expose a contractor or supplier to False Claims Act liability. A contractor can commit fraud by “knowingly” (and that is a loaded word) providing goods procured in violation of the BAA/TAA, since the government would not have purchased those goods if the true contents/origin were known. 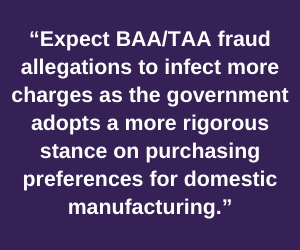 All of this means a potential bonanza for whistleblowers, who can get a sizable chunk of any False Claims Act recovery due to their identification of violations or suspected violations of BAA, TAA, or domestic content/origin requirements. And with whistleblowers engaged, contractors would do well to ensure their supply chain compliance hygiene is taken seriously.

Over the next twelve months, we expect that the administration’s renewed focus on domestic production and robust internal supply chains will lead to an increase in subpoenas/investigative demands from the Department of Justice (DOJ) and other authorities with an eye toward more rigorous enforcement of BAA/TAA requirements. We recommend that contractors try to get ahead of this expected enforcement curve by reviewing and strengthening their BAA/TAA compliance programs before a subpoena lands. While DOJ policies credit investigative cooperation and remedial measures on the back end, it is always cheaper and easier to have and maintain robust supplier certifications regarding origin and content of component parts/supplies and to maintain good documentation to help ensure BAA/TAA compliance even before an investigation begins. As was reaffirmed among those of us who were fortunate over the course of the past year, an ounce of prevention (spent on compliance strategies) is worth far more than a pound of cure (in legal fees, penalties, and damages).